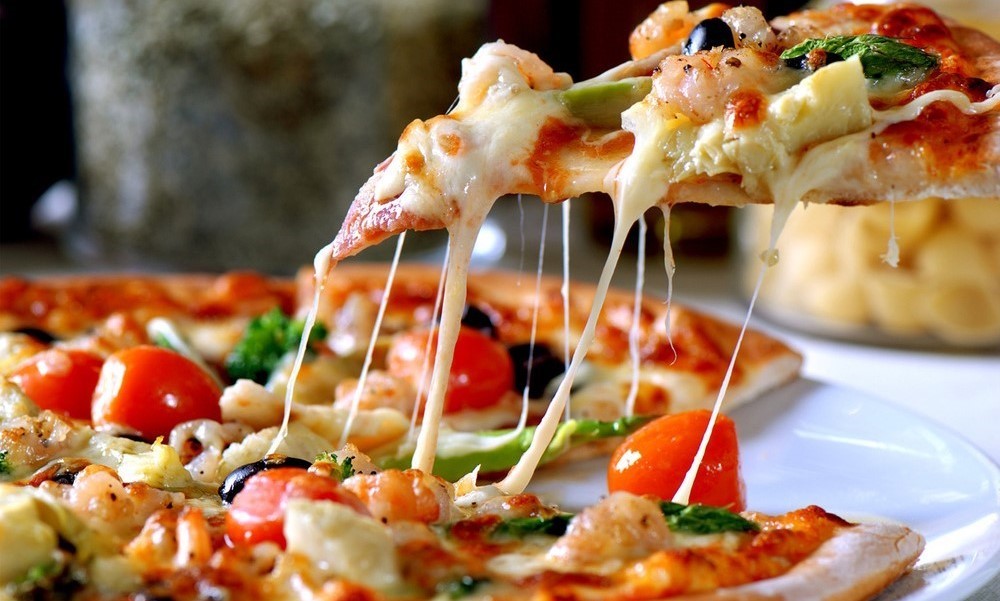 For many people, getting the opportunity to eat pizza every day for one year would be a dream come true. I mean, who doesn’t like pizza?

Most people can easily plow through slices just of love of it, but for Kyle Feeney, eating pizza for 365 days had a more meaningful purpose.

The 23 year-old successfully fulfilled his vow, consuming at least one slice of pizza every day from Jan 2015 to Dec 31. In an interview with Business Insider, he said:

“Every time I would come visit [New York City] I would end up eating pizza like three or four times over the weekend. One thing led to another and the ‘pizzagram’ was born.”

The Challenge and Pledge

What’s the ‘pizzagram’, you ask? It’s the official Instagram profile he used to chronical his one-year pizza adventure.

Feeney’s first video was taken January 1st, 2015, and shows him enjoying every bite of his pizza with some wine while taking a shower. He admitted he initially did it for fun but decided later on to do it for a noble cause:

“Once the second video was made, I figured there should be a reason for doing it. That’s when I called my aunt and decided to involve Autism Speaks for my cousin Robert.”

Through a Go Fund Me page, Feeney decided to help out Autism Speaks, a United States advocacy organization that sponsors autism research and conducts awareness and outreach activities aimed at families, governments and the general public, with the goal of raising $10,000.

He pledged to get a tattoo of a pizza slice if he succeeded.

Pizza is Delicious but Unhealthy

Feeney says there were times he wanted to give up but continued to eat and document because he was not only doing it for himself. No matter what day it was, where he was or what he was doing, he eat pizza.

It’s a good thing he loves pizza, otherwise the challenge would have been pure torture:

“I didn’t get sick of pizza, surprisingly. I guess I really love pizza.”

In fact, the most difficult part of it all was making the creative videos. Feeney considered dropping the project one day in June; fortunately, his mother talked some sense into him, making the point that failure was not an option.

Unsurprisingly, all that Pizza had a toll on his health, although he admitted to not being aware it aside from the few pounds he put on.

Feeney became concerned that his $10,000 goal might not be reached after only raising 7,155 towards the end of November 2015. But just like what seems to happen in every Disney Christmas movie, a miracle happen.

A happy hour fundraising round pushed him over the original goal with more than two weeks to spare!

With mission accomplished, Feeny ended his year of pizza on December 31st 2015, eating one last slice as he was sprayed with champagne.

He even kept his promise of getting a tattoo, which he had inked two days after the New Year.

“I had never been to a tattoo parlor before, but it was actually a fun time. Explaining that I wanted a slice of pizza tattooed onto my butt was… interesting, but Levi at Psychotic Ink did a tremendous job. All my friends got to watch it happen and he even worked in a Autism Speaks puzzle piece into it.”

A New Year, A New Challenge?

Although he succeeded in raising $10,000 for Autism Speaks, Feeney said he won’t make any rash promises this 2016:

“I suppose it’s the Year of Fitness. Pizza kind of took over the whole working out thing the last six or so months of the year. Maybe by 2017, I’ll be jacked. Who knows?”

Regardless, 2015 will be a year he’ll never forget and be proud of a very, very long time. Who else can say they ate pizza every day for one full year, let alone to raise money for a noble cause?